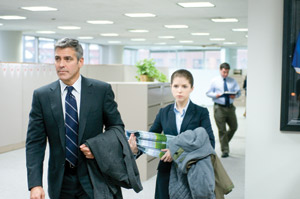 Interviewing an Academy Award-nominated director could be daunting, but when the director is Jason Reitman, it’s anything but. At the age of 32, Reitman has already written and directed three feature films and several shorts, and has garnered the respect of the film industry. Considered to be one of this generation’s hot, young directors, Reitman sought to clarify that “hot, young” referred to attractiveness. As the son of celebrated director/producer Ivan Reitman, Jason grew up on his father’s sets, experiencing such comedic works as “Meatballs,” “Ghostbusters” and “Kindergarten Cop” firsthand. Reitman recalls his time spent in the editing rooms of these and other films, and cites these experiences as defining, for they taught him to be ruthless with his own work.

Reitman’s first feature film was the 2005 black comedy “Thank You For Smoking,” which was nominated for a Golden Globe for Best Picture. Though this film was well received, it was the 2007 runaway hit “Juno” that catapulted Reitman to new heights. Nominated for an Academy Award for Best Director for “Juno,” Reitman says, “It was a tiny film that was very successful.” The film addresses the idea of growing up in a real way, and Reitman says, “I think it will stand the test of time.”

In St. Louis for the 18th annual St. Louis International Film Festival last weekend, Reitman was honored with its Contemporary Cinema Award, which is awarded to “filmmakers in mid-career who are doing innovative, independent-minded work.” Reitman’s latest film, “Up in the Air,” debuted at the Telluride and Toronto film festivals and opened the St. Louis Film Festival last weekend, and it has already been earning some Oscar buzz. This film has been a passion project of Reitman’s, as he wrote the screenplay before directing “Thank You For Smoking.” Reitman cites the book, which is based on the novel of the same name by Walter Kirn, as a “toolbox” to use as a springboard. As for where to break from the source material, Reitman says, “It’s intuitive. I find an author who has the same point of view on life as I do.”

“Up in the Air” features the incomparable George Clooney as Ryan Bingham, a detached man who spends his life on planes, flying to cities to fire employees of corporations too cowardly to do it themselves. Closed-minded to the idea of human companionship, Ryan seeks comfort in airport lounges, security lines and the perks that go along with frequent fliers. Ryan meets a similar-minded woman in one of these lounges, Alex (Vera Farmiga), and while their relationship is not at the center of the film, the chemistry between these characters is palpable and their witty rapport is infectious. Ryan’s life in the air is jeopardized when a young college graduate, Natalie (Anna Kendrick), convinces Ryan’s boss, Craig (Jason Bateman), that the company can cut costs by firing people via video conferencing.

With “Up in the Air,” Reitman claims, “I wanted to make a love letter to travel,” and not a film about the homogeneity of America. His film certainly speaks to the beauty of Middle America with rich overhead shots of American cities, which act as transitions between scenes. The film was shot mostly in St. Louis, which Reitman really enjoyed. He said St. Louis was a great location, as no prior movie has been primarily shot in St. Louis, and it has many original locations and climate change, and is a Middle America city that can double as other cities. “People were lovely” in St. Louis, noted Reitman, and from “actors to locations, you know when I love them.”

“Up in the Air” truly captures the anxieties of our time. Throughout the film, Reitman used real footage of people from St. Louis and Detroit discussing their reactions to being fired. These confessionals help to set the tone for the film, and their honest and touching portrayals put the film’s story in context. While in St. Louis last February to shoot the film, Reitman spoke at Webster University, where Kevin Renick, a St. Louis man, gave him a cassette tape of a song he wrote about being unemployed that was also titled “Up in the Air.” Reitman used Renick’s song in the film and on the soundtrack. The film is full of such genuine and authentic-feeling moments, and it beautifully tackles relevant issues everyday Americans are facing.

“Up in the Air” seizes upon American culture today and is a strong indicator of Jason Reitman’s potential. The film is sure to be a contender come awards season and Reitman deserves all the praises.