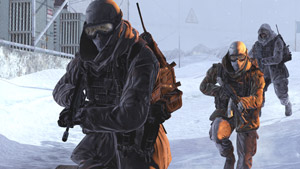 Infinity Ward, the developer of the “Call of Duty” series, slipped the news a few weeks ago that the PC version of the upcoming “Modern Warfare 2” (MW2) will not support dedicated servers. (MCT)

A few weeks ago, countless PC gamers across the world felt their palms inexplicably gravitating, nay, shooting toward their faces at ludicrous speeds. The cause of these facepalms? Infinity Ward, the developer of the “Call of Duty” series, had just slipped the news that the PC version of the upcoming “Modern Warfare 2” (MW2) would not support dedicated servers. Instead, multiplayer would be handled using Infinity Ward’s propriety matchmaking service called IWNET, which runs on listen servers.

Dedicated servers are permanent servers that almost always offer lower latency and smoother gameplay than any temporary listen server could ever hope to provide. But lag isn’t the issue here. The lack of dedicated servers in “MW2” isn’t about the removal of a feature but rather the suffocation of PC gaming culture.

Because multiplayer is handled through IWNET, players looking for public games are forced to play on playlists via automated matchmaking. Matchmaking, in a hyphenated word, is idiot-proof, but its merits end there. When the player has no choice over the map, latency or any other variables besides game type, it would be a stretch to say that playlists offer even the illusion of choice.

Turn now to the traditional server browser that’s been used in almost all PC shooters since the late ’90s. According to Infinity Ward, this is a broken system, to which IWNET is the solution. Antiquated but functional, the server browser is more spreadsheet than game, with rows of words and numbers cascading down the screen. Notably absent is an ever-turning circle calmly reassuring you that it will soon find a suitable match and that your brownies are done baking.

Yet the server browser is a better system. Why? Because it gives the player choice—sweet, delicious choice just like Mum used to give. Game type, map, player count, latency: It’s all there. The choice is yours. Or rather, the choice is yours in almost every PC game but “Modern Warfare 2.”

And the train keeps on rolling. The PC version of “MW2” is restricted to 18 players per server, the same number as its console counterpart. Even then, nine-on-nine matches are restricted to a certain playlist—most of the time, gamers will be playing in six-on-six games. Infinity Ward claims that the limit is due to the maps being balanced for a smaller player count, which is understandable. At least, it would be if the original “Modern Warfare,” which had maps balanced for a similar player count, didn’t support 64 players per (dedicated) server. Listen servers strike again.

But wait, there’s more! “MW2” on PCs inexplicably takes away the ability to lean around corners, which was a handy feature in the previous game. Amusingly enough, Infinity Ward justified the removal of the feature because their latest sequel is “not balanced for lean,” despite the gameplay of the two games being nearly identical. And I’ve yet to mention the myriad of other console-inspired travesties that PC gamers must suffer, including a five-second wait when the game switches hosts and an uncomfortably narrow field of view.

Beyond taking choice directly out of the player’s hands, IWNET also kills the possibility of custom content in multiplayer. With hosts spontaneously assigned by IWNET, players have little to no hope of playing user-created content. Infinity Ward said it has “made no decision” about releasing modification tools for their latest title, despite having released them for their previous three “Call of Duty” games on PC.

Thus falls another one of PC gaming’s strongest bastions. As a huge proponent of user-created content, the lack of mod support is perhaps my biggest disappointment with “Modern Warfare 2.” With doors opened to unlimited fan-made content, a strong modding community can add unlimited value to a game that might otherwise last a few days or weeks. And because they’re not commercial products, user-created mods often feature experimental concepts too risky for professionals to pursue.

Modding is also a stepping-stone for amateurs to break into the gaming industry. Valve Software is famous for hiring the “Team Fortress” and “Counter-Strike” teams. The latest modder to be hired by Valve was none other than the “Defense of the Ancients” guru (known by his online handle, IceFrog). But Valve doesn’t have room for everyone. There are several mod teams that have moved on to commercial projects, such as Tripwire Interactive or Unknown Worlds. My squinty eyes well up with tiny PC-gamer tears when I think about all the wonderful mods that might have been created for “Modern Warfare 2,” if only it had dedicated servers and mod tools.

Furthermore, without modding, players will have no choice but to turn to Infinity Ward for more content. With IWNET, the developer is in a position to charge for downloadable content on the PC platform, which is unheard of for such small-scale content as new maps. If Infinity Ward decides to charge PC users for downloadable content (DLC), the future of PC gaming might very well take a turn for the worse. Other developers may create their own proprietary networking services, leave out mod tools, and charge for DLC. On the other hand, if the game or DLC sells poorly relative to consoles, Infinity Ward may not even develop future “Call of Duty” titles for PCs.

I must also mention that “Modern Warfare 2” on PCs sells for $60 instead of the traditional $50 for all new PC games. A 20 percent price hike on a game with missing features? It’s suicide, right? But it’s not. The truth is that the “Call of Duty” series is one of the most lucrative franchises ever to grace a corporate bar graph. The original “Modern Warfare” alone sold 14 million copies across all platforms, and its sequel is set to outpace that number. Were the PC version to garner impressive sales at its new price point, “MW2” may set a precedent in PC gaming, and it won’t be long before we see games retailing for $60.

Instead of embracing the advantages of the platform, Infinity Ward has bound the PC version of “Modern Warfare 2” in a console straitjacket, and the doors to gaming’s most open platform are threatening to swing shut. Cue an audible sigh: Times are tough for PC gamers.