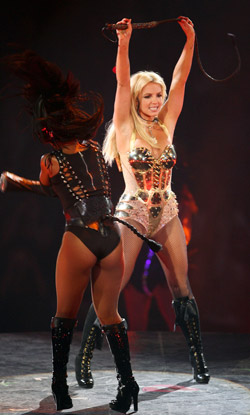 Britney Spears uses a whip during her performance at the Wachovia Center in Philadelphia, Pa., Aug. 30, 2009. (Young Kim | MBR | MCT)

“I’m rubber and you’re glue…” No, not that kind of comeback (though that is a classic). Every year, singers, actors, movie franchises and companies make big comebacks that shake up the entertainment world. This year saw the return of diva Whitney Houston, the “Star Trek” franchise and “Melrose Place.” While not every comeback is successful or well advised, some returns to the spotlight are big and successful enough to change the industry. This decade has been full of awesome comebacks, but there are only five that can be considered “best,” so let’s jump right in.

5) Mickey Rourke: In the mid- to late ’80s, Mickey Rourke grew to sex symbol fame with popular and critical successes “9 ½ Weeks” (with Kim Basinger), “Year of the Dragon” and “Angel Heart” (with Lisa Bonet). Unfortunately, stories of him being difficult on set started to leak out, leaving directors wary of working with him. In the early ’90s, Rourke decided to change career paths to boxing and mutilated his face in the process (it was so bad that he needed facial reconstruction). Once he retired from boxing in 1995, Rourke tried to return to acting but had little success until 2005’s “Sin City.” Rourke’s big comeback came in 2008 with his award-winning role in “The Wrestler,” a film about a down-and-out wrestler who struggles with his newfound insignificance (a story eerily similar to his own). In this role, Rourke won huge critical acclaim and a Golden Globe for Best Actor. He now has two impending successes on his plate (“Iron Man 2” and “Sin City 2”) that will no doubt cement his place back in mainstream Hollywood.

4) Paula Abdul: Paula Abdul made a name for herself as a choreographer and successful singer in the ’80s and early ’90s. She released two multiplatinum albums (“Forever Your Girl” and “Spellbound”) and multiple hit singles, including “Straight Up,” “Opposites Attract” and “Rush Rush.” After a battle with bulimia, Abdul released “Head Over Heels” to only moderate success, after which she took a break from music. Then, in 2002, Paula returned to the spotlight as one of the three judges on the outrageously successful Fox reality show “American Idol.” More than ever before, Paula was a household name who was recognized by people of all ages. Since then, Paula has become a bit of a laughingstock, as she has appeared intoxicated on the reality show and has since left the show. Despite this change in public perception, Abdul’s return to the spotlight is nonetheless noteworthy.

3) Neil Patrick Harris: In the late ’80s and early ’90s, Neil Patrick Harris starred as a teenage doctor in the dramedy “Doogie Howser, M.D.” The starring role catapulted the child actor to fame and acclaim, but after the show ended in 1993, Harris all but disappeared. Though he certainly starred in movies and TV shows, he could never again match his previous success. That is, until he starred in the stoner comedy “Harold & Kumar Go to White Castle” in 2004. The next year, Neil returned to TV prime time with the sitcom “How I Met Your Mother,” which has since garnered him three Emmy Award nominations. Along with his success in the sitcom, Harris has starred in the brilliant Web series “Dr. Horrible’s Sing-Along Blog” and entertainingly hosted the Tony Awards. Neil has once again become a household name.

2) Britney Spears: Everyone knows this story, as it is perhaps the most reported example of the celebrity comeback. At the turn of the millennium, Britney Spears was at the top of her game: Her first single (“…Baby One More Time”) had just gone number one in the U.S., and she was about to release her second album (“Oops!… I Did It Again”). Fast-forward to 2004: Britney married her backup dancer Kevin Federline (or K-Fed, as he is commonly known), and everything started to go downhill. In the years that followed, Britney went into rehab, walked into a gas station bathroom barefoot and attacked a paparazzo’s car with an umbrella (all of which was religiously covered by the tabloids). Then in the fall of 2007, Brit released her first album since 2003, “Blackout.” Although the album was a moderate success (it did produce a top-10 single with “Gimme More”), there were still doubts about her mental state. Throughout the next year, Spears continued to clean up her act and released her sixth studio album, “Circus,” in the fall of 2008 to greater success: It debuted at number one and produced Spears’s second number-one single, “Womanizer.” Since then, Britney has embarked on an extremely successful world tour, released another number-one single—the recent “3”—and appeared completely sane in the tabloids. Britney’s back!

1) Apple: You might not remember a time when Apple Inc. wasn’t the hottest computer and electronics company. In the early ’90s, Apple achieved moderate success with its PowerBook, as it crept up on Microsoft’s market share in the computer industry. Throughout the mid ’90s, though, Apple seemed to be unable to find its new hit product. In 1998, it released its first iMac and finally returned to profitability (which it hadn’t done since 1993). While this was certainly a success, Apple’s real comeback came in 2001 with the release of its now ubiquitous iPod. As I’m sure all of you know (considering the vast majority of you have iPods), the iPod ended up being a roaring success, breathing life back into the computing company, which has since revolutionized the way we buy music and the way we use our “phones.”