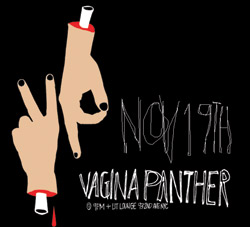 You were dead wrong when you were thinking that a vagina panther was a big cat. In reality, it’s the name of a New York-based rock band that specializes in music that is equal parts sexual effervescence and ferocity.  Hence the name. With four band members who site their biggest influences as “beer, orange amps, creepy fingers pedals,” VP is a frenetic blend of genres: black metal, new wave rock, and what I like to call “truculent, dizzying explosion anarchist thighslap.”  Yes, that means their debut album (which takes the name of the band because, let’s face it, that was too good not to use again) provides rhythms that will want to drive you to the dance floor.  But the most you will do is use your lower body as a drum set.  This kind of music urges listeners not to dance, but to walk around in a seemingly drunken haze and make percussion with their anatomy.  Each song starts where the last left off—lead singer Dead June’s voice an edgy plea, guitar riffs felt in the spine, foot stomping a necessity—which could work to create either cohesion or repetition. This time, it’s the latter. That’s the biggest complaint VP’s listeners will have:  the songs are almost indistinguishable from one another, and it’s hard to single out favorites. This, however, gives the band room to grow. It will be nice, if panther doesn’t got their tongue, to see the band evolve from this nice start.  Then, we’ll see whether they’re just little kittens or if they can hang in the jungle.

Rating: 3.5/5
For fans of: The Yeah Yeah Yeahs, The Kills, The White Stripes
Tracks to download: ‘I bet you there are some burley dudes on that ship…’. ‘Pressure Check’, and ‘Clean it up’