Shows that should be on DVD

There are so many shows on television today that don’t deserve to be, while others get canceled after only a few episodes or one season—in some cases rightfully so, and in others tragically so. By now, there are a number of shows that have already been canceled this season. (“Ruby and the Rockits,” anyone? No? Exactly.) But for every subpar show on television, there is at least one deserving, canceled show lingering in TV purgatory. Here’s a list of just a few of the shows that need to be put on DVD immediately:

Wishbone can easily take full credit for teaching a generation of children about generations of classic literature. Is it not a frequent occurrence that you hear a name of a book—say, “Cyrano de Bergerac”—you’re positive that you’ve read it, and you then realize you know the “Wishbone” version? The makers of this show brilliantly combined literary education with an adorable talking Jack Russell terrier, and it worked! They made 48 episodes and received multiple awards, due largely in part to their refusal to sugarcoat the content of the tales, remaining relatively faithful to the originals. There are a few episodes here and there on DVD, but a compilation is extremely necessary, especially for those of us who still need Wishbone’s help with “Henry IV.”

My obsession with this show is what spawned this list. It ran for only two seasons from 2001 to 2002 on Fox Family until it was unlawfully taken off the air. Not just a typical show for young girls, “State of Grace” centers on the friendship of two 12-year-olds in the 1960s: Hannah, a middle-class Jewish girl going to a Catholic school, and her best friend, Grace, a wealthy Catholic socialite. The show is funny, dramatic, true to life and extremely well written—and it does not exist anywhere. Not on YouTube, or Hulu, or even the really funky video-streaming sites. The two main stars ended up with recurring roles on “Arrested Development”: Hannah (Alia Shawkwat) as Maeby Funke, and Grace (Mae Whitman) as Ann (George Michael’s girlfriend, aka “Her?”), so the cult audience for that show would guarantee more DVD sales. Please, please, please bring this show to DVD!

While “Recess” may appear to just be a typical Saturday morning cartoon, its depiction of the playground as a complex society with a caste system and laws serves as a commentary on our own society, cleverly applied to elementary school. The ragtag group of main characters—the leader, the jock, the tomboy, the nerd, the artist and the new kid—is very funny in its own right, but the cast of supporting characters complements them wonderfully in their absurdity—personally, I think Upside-Down Girl deserved an Emmy. “Recess” ran for six seasons, and in the few times I’ve caught it on television, the sly wit makes me laugh in entirely different ways than it used to. 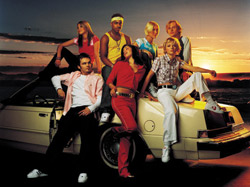 I’m going to come right out and admit it. This is an absolutely horrific television show. Meant as a vehicle for the group’s success in the United States, it mirrors their real experiences in Hollywood, but it probably should never have been on the air in the first place: No one can act (with the possible exception of Barry Williams as their manager…), and the plot lines are inane. It’s basically a glorified music video, and a cheesy, repetitive one at that. But no one can deny how catchy S Club 7’s music is, and the fact that it lasted three seasons shows that the audience kept coming back. We’ll hope that the viewers just needed a good laugh, which is exactly why the world needs this DVD.

This was Disney’s first original television series, and although its didn’t even make it to 1997, the general public was robbed of a great show. The show follows childhood best friends Tucker (Ben Foster) and Becca (Jewel Staite) as they attempt to navigate eighth grade—not such original stuff. But it had a unique narrative format: Tucker and Becca break the fourth wall and address the camera directly, relating their increasingly complicated lives to the flashbacks of their memories of childhood simplicity. This makes the show both more complex and more realistic, incredibly easy for a child to relate to. Plus, they have a dog named Steve…who’s a GIRL. If that’s not humor, what is?