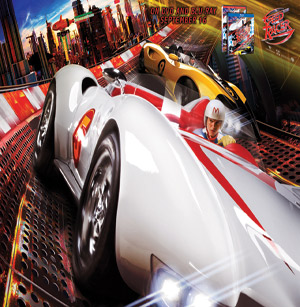 It was the summer of 2008. Britney Spears and Coldplay were rocking the airwaves with “Womanizer” and “Viva la Vida,” and everyone I knew had flocked to the multiplexes to watch movies like “Indiana Jones and the Kingdom of the Crystal Skull” and “Hancock.”

On a muggy Thursday night, I asked my friends if any of them wanted to see “Speed Racer” that weekend. Their response was loud laughter—a lot of it. One of them laughed so hard that Coke came out of his nose.

The movie was directed by the Wachowski brothers, I told them, and I knew that the second and third “Matrixes” sucked, but “V for Vendetta” was more than all right. Plus, the trailer was sweet.

But sometime after dinner on Friday, I found myself online, looking up movie times, and before I knew it, I was in line for the 7 o’clock show. What did I think? Well, if this article’s title hasn’t spelled it out, let me do it: I liked “Speed Racer.” Yes, THAT “Speed Racer.”

I’ll explain why in a second, but first, some disclaimers: The acting sucked, the story sucked and that little boy and his insufferable monkey most definitely sucked. I want to defend “Speed Racer,” but there are some things in this world that are indefensible.

As for the rest of the movie, it didn’t suck. Actually, it rocked. Realize here that the only thing left, now that I’ve cut out the acting, the plot and the two twerps, is the racing. Oh, that sweet racing.

Every bout is different, but they all begin the same: calmly, every engine cooing. Three, two, one…and there’s the flag! But the cars don’t roar off screen as you’d expect; they accelerate smoothly, weaving back and forth like balls in perpetual motion machine.

As the seconds become minutes, the passing backgrounds begin their fade from being clear to being streaks, and this is when the fun begins. I know I’m playing right into the Wachowski brothers’ hands when I say that the races are spectacular and satisfying, but I do not care, because they are undeniable, visual treats. The candy colors meet the neon tracks, making a cohesive space that is beautiful and exhilarating, and breathtaking spectacles leave me in awe, my cheeks flushed.

It’s like being a kid again—try to get past the cliché—and remember when you bought your first Hot Wheels set, the one with the loop-de-loop? Remember how sometimes you would close your eyes just as the car’s front wheels began their ascent of the ring, and for just a split second, you were riding the loop too, feeling the wind in your hair, and your stomach dropping at the peak?

That’s what “Speed Racer” was to me. Inside this incredibly flawed movie beats the heart of a gleeful child.

In the days after watching “Speed Racer,” I tried to convince my friends of “Speed Racer”’s greatness. They remembered “The Matrix” sequels and wouldn’t believe me. Without anyone to turn to, I went to Rotten Tomatoes to see what the critics thought. “Speed Racer” had a 36 percent Tomatometer Rating. It was understandable; the chief complaint was the special effects were “headache-inducing,” so clearly most critics weren’t raised in the right generation to enjoy this movie.

But when I look back at all the crap we paid for that summer, like Britney Spears, Coldplay, “Indiana Jones” and “Hancock,” I can’t believe that “Speed Racer” wasn’t more celebrated. Maybe “celebrated” isn’t the right word, but nonetheless, it’s hard to swallow that “Speed Racer” was only the 64th highest grossing movie in 2008, one spot above “Prom Night,” and two ticks below “College Road Trip.” It deserved better.

Do yourself a favor, and rent “Speed Racer” the next chance you get. And make sure to keep your eyes open when Speed hits that loop. You won’t want to look away from his shiny, shiny car.