What to do over Fall Break? 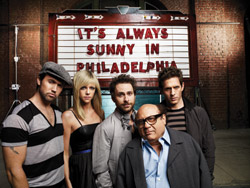 Fall Break is this Friday, and we at Cadenza know what you’re thinking. “I get a whole day off from school? But wait, I don’t have classes on Friday anyway. And I have two midterms next Monday. And a paper due in that other class. This isn’t much of a break at all…” Well, whether that is your train of thought or not, we’ll give you some ways to spend your break.

Catch up with shows—if you’re anything like me, this year’s midterm time-suck took a huge bite out of your TV watching time. Enter Fall Break, which features stress-free nights on Thursday, Friday, Saturday and Sunday, a cornucopia of slacker hours. Use this time wisely, boot-up Hulu and catch up with funny shows like “It’s Always Sunny in Philadelphia,” crazy shows like “Fringe,” cute-yet-depressing shows like “Jon and Kate Plus 8” and awesome shows like “Glee.” Midterms made us miss “House” last week, and we need to know whether House solved the case while bouncing his ball or while staring at Wilson’s hair.

Check out a movie—there are a lot of good films in theaters right now: “Whip It,” “The Invention of Lying” and “Zombieland.” And, “Where the Wild Things Are” comes out this Friday. So head down to the nearest theater, and enjoy a flick or four. Note: Filmboard is giving out free tickets to a midnight screening of “Where the Wild Things Are,” showing at Chase Park Plaza, at 5 p.m. on Thursday by the Clocktower.

Music on the Loop—The Pageant has something for everyone this week, with Mario and Trey Songz on Friday, Lucinda Williams on Saturday and perennial favorites The Used on Sunday. Take a night off and check out the music scene on the Loop. If smaller venues are your thing, the newly-renamed Firebird on Olive Street is hosting The Blakes, a ’60s Brit-rock/punk band from Maine on Friday, Oct. 16.

Head to the Central West End—you can’t go wrong with an event called “Fabulous Fridays on Euclid and McPherson.” The Central West End hot spot offers a variety of entertainments, from classical guitarists to fire dancers. Grab some dessert from the nearby Cupcakery, and you’ve got yourself a near-perfect night!

“Ragtime”—the Performing Arts Department is putting on “Ragtime” this year. The musical deals with race, class and ethnic relations in America and features “cameos” by Harry Houdini, Booker T. Washington and Henry Ford, among others. The show is being revived on Broadway next month, so check it out here first Oct. 15, 16 and 17 at 8 p.m. in Edison Theater.

Play a videogame—There isn’t just a glut of great, unplayed videogames sitting on Best Buy’s shelves; there’s a glut of fantastic, neglected videogames in my living room. Break out a classic like “Super Mario Bros. 3,” jump into a Goomba’s Shoe and show the little bugger what terror looks like. Or, crack open a new classic like “The Beatles: Rock Band” and “Uncharted 2.” Or, make God fight zombie armies in “Scribblenauts” until you finally look up at the sunrise and realize it’s Monday morning. Dang that game, it’s addictive.

Make fun of Dan Brown—It’s too bad that “National Treasure” wasn’t released until after “The Da Vinci Code” (the book) because when you think back on it, Brown’s book is basically “National Treasure in Europe,” and that comparison alone would have clued us into how awful it was, sparing us from all the hype, which led to an embarrassing amount of praise. Well, Brown is back again, with a book titled, “The Lost Symbol,” which is basically “National Treasure in America,” which is basically “National Treasure,” which is basically awful. So make your friends laugh this Fall Break by reading them random quotes from the book, like “the revelation crashed over Langdon like a wave” or “then, like an oncoming truck, it hit him,” or “abruptly, Katherine jolted upright in her seat, as if she had made a sudden realization” or “an instant later, Langdon saw it.” Throw in a “what happened next, Langdon never saw coming,” but end on “for a moment, Langdon was back in Westminster Abbey, standing at Newton’s pyramidical tomb, where he had experienced a similar epiphany.” Oh wow! This realization smacks me in the face the way only an endangered sea lion could, with his fuzzy flippers. I should watch “National Treasure” instead of reading this nonsense.

Take a trip—We know, one extra day doesn’t give you much time, especially because you have three times more work to do. But if you can swing it, there are a lot of awesome places close to St. Louis available to us. Kansas City has a ton of museums, and the amazing live performances at the American Jazz Museum are definitely worth checking out along with the exhibits. And if you’re not into that, both Relient K and Miley Cyrus are performing there that weekend as well. Wilco is coming to the UIC Pavilion in Chicago on Oct. 18, or, on the complete other side of the spectrum, Boys Like Girls will be at the Riviera Theatre. You can also swing by Memphis and go to Graceland, the home of Elvis Presley, in all its fabulously kitschy greatness. While you’re there, Memphis features multiple museums devoted to American Soul and record studio tours. All of these destinations are a quick four- to five-hour drive or bus ride away, so go enjoy the music!

Tags: Fall break, what to do, work