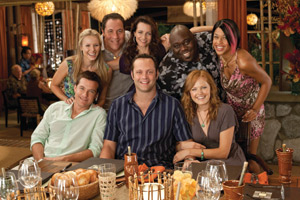 The philosopher Herbert Spencer once remarked that marriage is “a word which should be pronounced ‘mirage.’” In the new film “Couples Retreat,” marriage is certainly portrayed as if it were a distant mirage. This new comedy reunites much of the cast of the 2006 flick “The Break-Up.” Vince Vaughn, Jason Bateman and Jon Favreau come together again to play best friends, with Peter Billingsley, who plays their other friend in “The Break-Up,” directing them in this film.

Jason (Jason Bateman) and Cynthia (Kristen Bell) are a couple on the verge of divorce who forcefully coerce three other couples to go on vacation to Eden, a place described as “Disneyland for adults.” After painfully presenting their marital woes through a PowerPoint presentation, Jason and Cynthia beg their friends to accompany them on the trip, claiming they can only afford the group rate. Though everyone seems skeptical about the couples skill-building on the itinerary, Cynthia quickly assures them that it’s optional.

Upon arriving at Eden, aside from the obvious beauty of the place (the film was shot in Bora Bora), philandering Joey (Favreau) is excited to see hot 20-somethings waiting for him while he ignores his wife Lucy (Kristin Davis), who seems just as disinterested in him. Shane (Faizon Love), still reeling from his recent divorce, brings his new 20-year-old girlfriend Trudi, whom he met at the mall. Dave (Vaughn) and Ronnie (Malin Akerman) appear to be happily married amongst their friends, but their issues surface when therapy begins. Everyone soon learns that participation in the resort’s couples therapy is not optional, so their group-rate vacation comes at a price.

This film has arrived and found its place as a raunchy yet sensitive comedy. Co-written by Vaughn, Favreau and Dana Fox, wit and humor come across while the film explores the deep-seated issues that affect these four couples. “Couples Retreat” balances out the serious problems at the core of these marriages with physical comedy that ranges from Dave in a sticky shark situation to a scantily clad yoga instructor who thrusts himself against both the men and women to demonstrate proper form.

Vaughn is the highlight of the film as the voice of reason, coming to realize that he does take his beautiful wife for granted. My favorite scene has Dave playing an intensely heated game of “Guitar Hero” against the resort’s manager. John Michael Higgins and Ken Jeong turn in hilarious cameos as two of the therapists, and Jason pulls a hypothetical gun on Jeong, asking him whether he and Cynthia will make it, but decides to holster it for later. Everyone’s problems are confronted when the group must make a dangerous trip to the singles resort on the other side of the island to retrieve the runaway Trudi.

In the age of intelligent comedy, this film has found its stride. With an all-star cast and sharp one-liners, “Couples Retreat” is worth the trip.