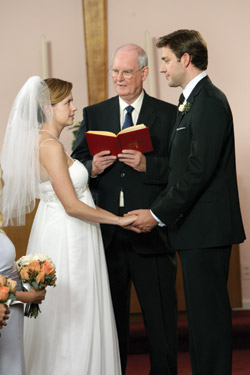 Most television shows have that one couple. You know, the two people who are madly in love with each other but can never seem to make it work, only engaging and frustrating the viewers so much every time they have a moment that never really comes to fruition. And usually, if they do make it work, the show suddenly gets kind of boring. But not “The Office.” Jim and Pam spent three seasons experiencing unresolved sexual tension, driving viewers crazy week after week. But then they got together. And the show, luckily, was even better than ever before. Jim and Pam are getting married on Thursday, and as Cadenza’s present to the happy couple, we’d like to present the Top Five Jim & Pam moments.

5. 27 seconds of silence (“Booze Cruise,” season 2) – When Jim and Pam find themselves alone on deck of a ship that Michael rented, they have a 27-second pause in which Jim manages to convey all of his love for Pam in a few stolen glances, and it’s basically epic.

4. “Not a bad day” (“Diversity Day,” season 1) – The first ever squeal-worthy Jim and Pam moment, when Pam falls asleep on Jim’s shoulder and he can’t contain his delight.

3. The proposal (“Weight Loss,” season 5) – After they’ve been dating for a year, Jim and Pam meet at a gas station in the rain. He gets down on one knee and proposes, and of course, she says yes. Surprising, yes, but it was awesome.

2. The beginning (“The Job,” season 3) – Finally, at the end of season 3, when it seems like Jim and Pam will never get together, Jim walks into Pam’s confessional and asks her out. Pam has never been so happy, and neither have we.

1. THE KISS! (“Casino Night,” season 2) – In the second season’s finale, Jim confesses his undying love for Pam, and she rejects him. Just a few minutes later, in the darkened office, he kisses her. She kisses back. It’s passionate and wonderful. And then the season ends.