We all know that a movie’s soundtrack can significantly add to the film viewing experience. The only reason I barely tolerated Kevin Costner in “The Bodyguard” was Whitney Houston’s rendition of Dolly Parton’s “I Will Always Love You” (which went on to become one of the best-selling singles of all time). And, like Ms. Houston’s power ballad, some songs are nearly inseparable from the movies that used them. Kenny Loggin’s “Footloose” elicits images of Kevin Bacon punch-dancing through an abandoned warehouse; Zach Braff and The Shins are forever connected in my head; and the few times I am forced to suffer though Evanescence’s “Bring Me To Life” reminds me of the even worse situation where I sat through “Daredevil.” So, if you’re all still following my horribly tangential train of thought, Cadenza brings you the list of the best songs written specifically for movies.

Disclaimer: We’re excluding Disney songs because, well, they deserve their own list; and I vetoed that annoyingly catchy Counting Crows song from “Shrek.” I’m not even typing its name, because just reading it is enough to get it stuck in your head for weeks. 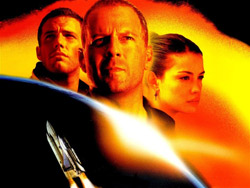 10. “I Don’t Wanna Miss A Thing”—Aerosmith—“Armageddon”

Steven Tyler wrote this one to help out his daughter’s little film about a mass apocalypse. This has become one of those songs you just belt out in the car, and it continued to solidify Aerosmith’s ability to dominate rock for 30-plus years.

I’ve only cried during a Nicholas Cage movie twice: “City of Angels” and “National Treasure 2: Book of Secrets”—but that last one was because I paid $12.50 to see it. But with the help of the “City of Angels” soundtrack and lyrics like “I’d give up forever to touch you/ Cause I know that you feel me somehow,” “Iris” became one of the Goo Goo Dolls’ greatest hits and the anthem of lonely, pining ’90s teenagers everywhere.

With its awesome orchestration, profound lyrics and crazy tempo shifts, this song just had to be written by a Beatle. The perfect complement to the James Bond movie of the same title, “Live and Let Die,” was the first song of the movie series to score an Academy Award nomination.

Before Tom Cruise was crazy, he was “dangerous.” And besides giving America some of the most homoerotic scenes in all of movie history, “Top Gun” also bequeathed us “Danger Zone.” Check out the hilarious high-octane video and contemplate, even if just for a second, how awesome it would be if you were a “Top Gun” aviator.

Played by almost every high-school pep band during football games and found on every sports mix, Survivor’s “Eye of the Tiger” makes you believe you can defeat anything. Seriously, Rocky Balboa singlehandedly crushed the U.S.S.R. And why isn’t “Gonna Fly Now” on here instead, you ask? Well, is “Gonna Fly Now” parodied in a Starbucks commercial? I thought not.

No one can strut quite like John Travolta. And he was able to exhibit his superior ability to walk while holding a paint can to the Gibbs brothers’ disco hit “Stayin’ Alive” in the opening scene of “Saturday Night Fever.”

Like half of the songs on this list, Simple Mind’s “Don’t You (Forget About Me)” hails from the ’80s. But none of the others has the distinction of being part of a film that affected a whole generation of teenagers. And it stands the test of time. The song and movie still resonate with high-schoolers over 20 years later.

I might start looking into that whole plastics business because, as graduation nears, that look on Dustin Hoffman’s face at the end of the “The Graduate” is getting too familiar. With the help of “Mrs. Robinson,” Simon and Garfunkel’s soundtrack to “The Graduate” bumped the Beatles “White Album” out of the No. 1 spot on the charts in 1968. That’s kind of a big deal.

“8 Mile” is the second best thing Eminem has ever been a part of—the first being his fight with Ray Romano in “Funny People.” Back before Eminem became a parody of himself feuding with Mariah Carey, he was a legitimate rapper, feuding with Moby. His 2002 film, “8 Mile,” was well received by critics, and “Lose Yourself” scored Marshall two Grammys and an Academy Award.

This one is a no-brainer. Celine Dion’s epic love ballad for an even more epic movie won an Academy Award in 1997, Golden Globe Award in 1998, and four Grammys in 1999. From the moment you hear those four notes on the flute, you’re taken back to when Jack held Kate on the bow of that ship. But then you remember how the manipulative liar managed to take up all the space on that king-sized headboard, sending poor Leo to his frozen, waterlogged death.