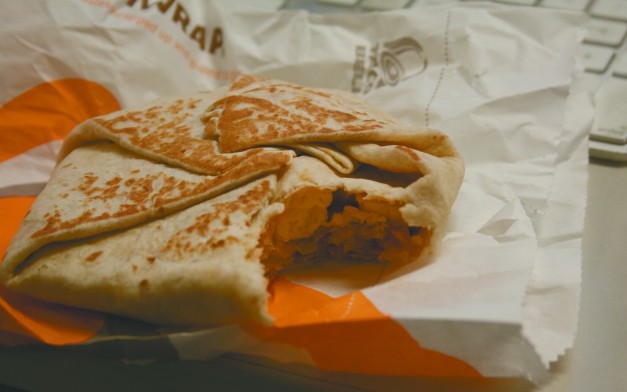 The A.M. Crunchwrap is just one of the new items Taco Bell is offering for breakfast.

Taco Bell’s much-hyped breakfast menu debuted today, and Student Life was on the scene to try it. Will Taco Bell be able to dominate the wee hours of the morning much like they dominate the wee hours of the night? Only time will tell. The menu is solid, if not overwhelmingly amazing, but nothing wowed me in the way that an Egg McMuffin or a McGriddle did. Seriously, a McGriddle has syrup baked into the bun. That is actual innovation. I expect a little more creative genius from the company that combined Doritos and tacos. Whoever came up with that combo is the new Steve Jobs.

The most successful item that Taco Bell debuted was the Waffle Taco, which I devoured before I remembered I had to take a picture of it. It was a bit on the dry side, and could have used some syrup, but it was perfectly sized for breakfast. I tried the bacon one, which was less visually exciting than the sausage one, but I imagine a safer choice. The sausage was so popular this morning that they had ran out of patties and had to start offering “sausage crumbles,” which is one of the least appetizing things I’ve ever heard a Taco Bell employee say. The Waffle Taco shell maintained its shape despite being a soft, slightly moist waffle, which is either magical or terrifying, depending on how you feel about Taco Bell in general.

Taco Bell also offered a twist on their popular Crunchwrap, the A.M. Crunchwrap. Instead of the taco shell on the inside to give it the “crunch” it needs, they used a hash brown, which was tasty if a bit dry. And instead of nacho cheese, the sauce tasted similar to the same sauce they use on their quesadillas, which reminds me of the pure euphoria of 3 a.m. Taco Bell, much like the ratatouille in “Ratatouille” reminded that old French critic of his childhood. We opted for a “vegetarian” version, which meant no tiny bits of bacon or “sausage crumbles,” because our Editor-in-Chief is vegetarian, and also because I’m still scared of the phrase “sausage crumbles.”

The thing that most surprised me about Taco Bell breakfast was that some of the items were quite conventional. The Breakfast Burrito was the same as a breakfast burrito you could get from anywhere, or even make yourself. However, the Waffle Taco and the A.M. Crunchwrap were both solid hits, if not home runs (I’m making a baseball metaphor but I only slightly understand baseball, so hopefully this reference wasn’t an error. Yes, I’ll stop with the puns now.). I’m not sure whether the dryness of both items was a result of it being the first day they were available, the fault of the employees or just the way the breakfast food at Taco Bell is, but if they can fix that, I’d be a regular at Taco Bell for every meal.